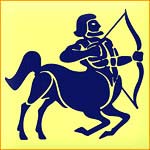 Ruled by Jupiter, Sagittarius is a masculine positive mutable fire sign. The ninth sign of zodiac Sagittarius, symbolized by the archer is known as 'Dhanu' in Hindi.

Being the travelers of the zodiac, they enjoy travelling and exploration, more so because their minds are constantly open to new dimensions of thought. They are ambitious and optimistic, and continue to be so even when their hopes are dashed. Their strongly idealistic natures can also suffer many disappointments without being affected. They are honorable, honest, trustworthy, truthful, generous and sincere, with a passion for justice and truth. They balance loyalty with independence.

They do lack a bit of tact. They often open their mouths to change feet. They are focused intensely on learning about their lover and exploring them more deeply. However, they don't care for discipline or confined spaces and have a tendency to procrastinate.

Health
Sagittarius rules the region of the body directly surrounding the hips, the sacral region of the spine, the coccygeal vertebrae, the femur, the ileum, the iliac arteries, and the sciatic nerves. The diseases Sagittarian suffer from are locomotor ataxia, sciatica, rheumatism, and hip disease. As patients Sagittarians are most gentle and recover easily. With their frank and kind nature they are most trusting and ever ready to follow all the instructions of the healer, but they also respond equally to every negative suggestion.

Career
Sagittarians are found successful in social administration, in public relations, as scientists, and musicians. They often show interest in sports especially racing and rallying.

Ideal Partner
Sagittarians need organized and tolerant people to spend their lives and hence they tie up best with Aquarians or Librans. 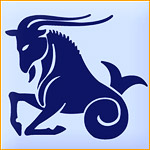 Capricorn , a feminine negative cardinal earth sign is rued by Saturn. This is the tenth sign of zodiac that extends from December 23rd to 20th January and is called 'Makara' in Hindi.The sign of Capricorn is an earthy sign and ruled by the planet Saturn.

About Capricorns
The worker bees of the Zodiac are Capricorns. They are highly ambitious and determined. People born under this sign are true workaholic and accept hard work. They love to undertake hardships to prove their caliber of facing and winning any problem. They undertake every venture seriously. They are always keen to seek answers to the problems, and will extract them even if the other person is not willing to answer them. They wont stop until they get their answers. Loyal as a friend, capris are cold but snobbish at times.

Health
Capricorn people do not yield to disease very readily. They are of a wiry, and persistent nature. Capricorn people are too sensitive and very retiring. They often form habits of entertaining gloom and despondency, which have a deteriorating effect upon the health. The sign of Capricorn rules the knees, the skin, the joints, and the hair. The skin of a Capricorn person is often sallow and dry. The diseases to which Capricorns are subject includes – eczema, syphilis, leprosy; also dislocation of the bones.

Career
Capricorns are industrious, efficient, organized. They are scrupulous with details and adopt a rather conventional posture in business and in life. They make superb administrators, and often rise to very high positions of respect and authority in their careers. They see duty and law enforcement as of paramount importance, and can unfortunately become overbearing. 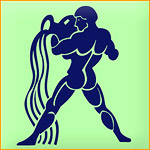 The eleventh sign of zodiac – Aquarius is known as Kumbha in Hindi and lasts from January 21st to February 19th. Ruled by Uranus, this is the masculine positive fixed air sign.

About Aquarius
People born under this sign have love for mankind and will do anything for the masses. With little emotional appreciation, they are often thought of as disliking the individual. Always have unusual ideas and rule computers, airplanes and astrology. They have positive outlook and live in future. They change their minds as very quickly, as soon as they think up a new idea. They always come up with new ideas to provide a solution to the problems, without bothering to figure out the details. They have strong convictions and seek truth above all things.

Aquarians are frank, practical and idealistic with philosophical and spiritual bent of mind. Not always intelligent and logical, they are devoted to work that inspires them to the extent of injuring health. Argument is something they get involved into just for the sake of fun. Aquarians favor working in group projects, provided that they are given the recognition of the leader. They have a feeling of unity with nature and a desire for knowledge and truth that makes them admirable.

The negative aspect of this zodiac sign is rudeness, resentment, and the silence that may burst out suddenly in extreme temper. They sometimes show immense hatred towards foes which may even enlarge itself into a hatred towards the complete mankind.

Health
The sign of Aquarius rules the lower limbs and ankles. The diseases with which the Aquarian may be afflicted are swelling of the legs, and nervous diseases of various kinds.

Career
Aquarians can turn their hands very successfully to most things, since they are very determined individuals. Most are hardworking, even driven in their chosen field. Many choose rather unusual or esoteric careers like Astrology. They see life as a series of golden opportunities to make the world a happier place, and if money comes their way, so much the better. They might excel in technical fields and those linked with electrical and radio industries. Few also possess God gifted art of being a good entertainer, mimicry artist and musician.

Ideal Partner
Aquarians seek one who is an idealistic free spirit. However, the most suitable match for them are Capricorns. 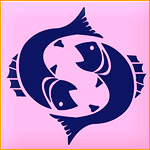 Ruled by Neptune, Pisces is a feminine negative mutable water sign. This is the twelfth and the last sign of zodiac that extends from February 19th to March 20th.

About Pisceans
People born under this sign are most intuitive of all the zodiacs. They are so considerate and empathic that they often take on other's pain without bothering for their own health, which is one reason why pisceans make them the best nurses. Pisceans possess a gentle, patient, malleable nature. Ascendants of this signs are of a lymphatic and negative nature very much fond of luxuries, which too often leads them to seek a life of ease. The Pisces people respond very readily to suggestions, whether they are good or evil.

Pisceans are selfless, and spiritual. Feelings define Pisceans, and they not only feel their own burdens and joys but those of others as well. Their positive aspects include their superb observation, concentration while listening, and good grasping power. They are never egoistical in their personal relationships. They have greater than average instinct for nature, beauty, traveling, luxury and pleasure. Pisceans are compassionate, charitable and quickly put the needs of others ahead of their own. It's this kind of self-sacrifice which keeps them going.

Health
Pisces rule the feet, liver and lymphatics. The ascendants of Pisces can be threatened by boils, ulcers, anaemia, and other skin diseases like inflammation of the eyelids, gout, inflammation, foot disorders, lameness and heavy periods.

Career
Pisceans are good in subordinate positions or a heads of small business. They cannot handle much bigger business or a department. They can be successful as secretaries, bookkeepers, architects and lawyers. Their spiritual qualities can also develop their inclination towards a careers in the church or as mediums and mystics. Since Pisceans are versatile and unable to concentrate much on any one project, they often simultaneously follow more than one occupation.