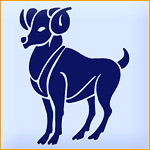 Denoted by Ram, Aries is the sun sign for those born between 21st March and 20th April. This sign called 'Mesha' in Hindi, is the first sign beginning with new zodiacal year. Aries is ruled by the planet Mars and this gives the sign its adventurous spirit. The young ram is adventurous, ambitious, impulsive, enthusiastic and full of energy

About Aries
People born under this sign are the born leaders, with genuine concern for those they command. They are brave, fearless and highly dominating. In personal relationships Arians are adventurous, impulsive, full of energy, direct and candid, and make enthusiastic lovers. Mentally Arians are intellectual.

Aries are self conceited both negatively and positively. Their immense energy makes them aggressive and restless, argumentative occasionally, headstrong, quick tempered and easily offended. Those with Aries on the ascendant, are quick to anger but also ready to forgive. On feeling affronted they often hold grudges. They act and speak quickly.

Ideal Partner
Arians need support and encouragement, so their ideal partner for them are the ones of the Earth signs, either Taurus or Virgo. 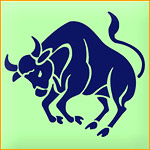 Taurus, the second zodiac sign lasts from April 21st to May 21st. The Bull representing this sign indicates that Taureans are stubborn and dependable, and are blessed with a bullish steadiness.

About Taureans
People born under this sign achieve almost everything in life. Believed to be down to earth , they possess strong sense of values. Taureans are reliable, responsible, affectionate and loyal. They are easy to get along with and are good team players. They are patient, determined and possess enormous reserves of strength and common sense. They are gentle, even tempered, good natured, modest and slow to anger. Taureans dislike quarreling and tend to avoid ill-feeling.

It is rare that a Taurean would be rigid, argumentative, or a querulous bore but if provoked, he/she can explode into violent outbursts of ferocious anger in which he/she seems to lose all self-control. Taureans are liable to fierce possessiveness. Their negativity is expressed in dullness, stubbornness and resistance to change.

Health
Taurus rules the region of the neck, the ears, palate, larynx, tonsils, thyroid gland, occipital region, cerebellum, lower jaw, atlas, and vocal chords, carotid arteries,cervical vertebrae, jugular vein, and the pharynx. Taurus being a negative sign, when a Taurean contracts a disease, he holds on to it tenaciously. They have great fear of sickness, which makes them poor doctors or nurses. Also one must never let a Taurus patient think that he is much ill, for his fear of sickness will often bring on a spell of it.

Career
Mentally they are more witty than intellectual. Highly practical Taureans are ambitious and career oriented. Taureans are good in the position of managers in professions including – banking, medicine, insurance, education, bureaucracy, farming, music and sculpture making.

Ideal Partner
Taureans seek emotional stability and financial security and gel well with one of their own kind i.e with another Taurean. 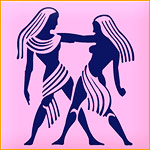 Denoted by the sign of Twins, Gemini is the third zodiac sign that lasts from May 22nd to June 21st.

About Geminians
People born under this sign are dual natured, complex and contradictory, which is very well evident from the sign of Twins. Involved in gossips, they know everything about every one's life. They have a peculiar quality of doing many things at once, talking fast and using hands while talking. People born under this sign love to dazzle with their intelligence and quick wit and are consequently the star of any party.

Geminians accept new activities with great enthusiasm but lack the same, at the time of implementation. However their good qualities are – they are affectionate, courteous, kind, generous, and thoughtful towards poor and suffering. It is their versatility that makes them adaptable and adjusting natured.

Health
Gemini rules the arms, hands, shoulders, lungs, thymus gland, upper ribs, trachea, bronchi, capillaries, breath, and oxygenation of the blood. On being given even a bit of help, Gemini can recover from a disease. Geminians are mostly subject to diseases like pulmonary troubles, bronchitis, asthma, pneumonia, consumption, pleurisy, and nervous disorders.

Career
Geminians though are unreliable but can be successful in most of the walks of life. They are found successful in fields of writing and speech making them good debaters, diplomats, orators, preachers, lawyers, poets, teachers, and journalists. They are good scientists and army personnel as well.

Ideal Partner
The Twin sign, seeks a partner who is mentally stimulating. Geminians need someone who can deal with their unpredictable temperament and cope with their constantly changing plans. They get along well with Aquarians.

Cancer, the most empathetic sign is symbolized by the Crab. Ruled by Moon, this is the fourth zodiac sign that lasts from June 22nd to July 22nd and is called 'Karka' in Hindi.

About Cancerians
They are deeply emotional and intuitive. The top concern for them is their family. People born under this sign are unduly sensitive and are more concerned with expressing emotions than getting involved in superficial conversations. They can be moody, drawing into the protective shell if things around them get too intense.

They appreciate art, literature, and especially drama, where the flow of action and feelings particularly excite them. They may themselves possess considerable literary and artistic bent of mind. Cancerians have a retentive memory, particularly for emotionally laden events which they can recall in detail for years afterward.

Cancerians are not easy to understand, for their moods often fluctuates from sweet to cranky. They can be untidy, sulky, devious, moody, and inclined to self-pity because of an inferiority complex. A typical Cancerian broods on insults. They also tend to change their opinions and, indeed, their occupations, and lack stability. Cancer people are apt to do the opposite from what they are advised to do.

Health
Cancer rules the stomach, diaphragm, peristalsis, the pancreas, gastric vein, upper lobes of the liver, thoracic duct, chymification, and the serum of the blood. The afflictions which may be classed under the sign of Cancer are dropsy, indigestion, and sclerosis. Cancer people are very fond of food and are usually hearty eaters.

Career
They can be good journalists, writers or politicians, though in this last capacity they are more likely to remain in the background rather than attain prominent positions of power.